Time as a Machine Learning Feature

There are many kinds of data naturally following cycles, like longitude, rotation, positions and movements of atronomical objects or tides for example. The way we measure time is one of the upiquitous primary application areas of cyclic data.

But is the way we use to handle and display time values also suitable for expressing and introducing cyclicality to a machine learning model?

To make it quick $\rightarrow$ No.

The reason for this is, that “cyclicity” is only an implicit feature of time known to us, as we have learned to cope with it in our childhood, which means we are able to understand distances between two adjacent points in time on the cyclic scale implicitely. A machine learning algorithm using a regularily scaled time feature, e.g. represented as 24h time, will interpret some distances between two adjacent points in time wronlgy.

The following python code shows how time can be encoded in form of sinus-cosinus value pairs.

At first we generate some random points in time and import some default libraries and do something about the plotting style. The import looks like much, but only numpy, pandas and matplotlib.pyplot are really needed.

The former code will produce an output similar to the following table.

Plotting this data will only display a linearly increasing graph not indicating that inter-day timesplits could be closer than intra-day timesplits.

To obtain the desired behaviour of correctly interpreted time intervals at the transition between two days and thus correct cyclical characteristic representation, we represent times as sine/cosine value tuples. The following code will create a pandas dataframe from the former times series and will

generate an output similar to this table.

Be aware that you cannot use a single value alone, e.g. sine or cosine, for representing time as you would introduce symmetric effects as horizontal lines drawn accross the plot would always touch two points in the graph with the meaning that two non-adjacent times would be equal.

Using sine_time and cosine_time together creates the necessary unambiguity and introduces cyclic properties correctly as machine-learning feature. The following graph of a randomly selected sample of sine-cosine-time points illustrates the properties of the previous feature transformations.

Have fun evaluating the effects of your transformed cyclic values on your machine learning models. 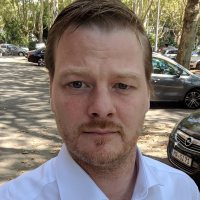